No slides are available in this gallery 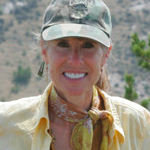 Linda’s vision and passion for ONF comes not only from her military family background but also from her love for wilderness, photography and graphic arts. After having a lifetime career as an award winning creative/art director, in June of 2005, she visualized a way to help keep the memories alive for a Gold Star mom whose son was one of 13 fallen from Linda’s Marine son’s unit. And so, the first ONF awareness campaigns began. By 2010, Linda wanted to share her passion for wild Montana places with injured veterans. The first S.A.S. therapeutic outdoor retreat began.

Linda's Marine son completed two Iraq combat tours in 2004-05 and 2007-08, and is now raising a family. Her husband, Ed Zurey, is a retired US Navy Captain. He also served in Iraqi Freedom as well as other conflicts.

Since 1997, Linda has been an avid horsewoman most of her life and has spent many years riding and packing into remote mountain wilderness destinations. She is a professional wildlife photographer and her images have been published in several magazines, calendars and postcards. She worked with at-risk kids for Youth Dynamics as a mentor. In the 1980s, she ran a marketing and advertising agency in Madison, Wisconsin while volunteering as a registered emergency medical technician. In the 1970s, Linda toured the racquetball circuit as a professional nationally ranked player.

Today, Linda is still exploring wilderness places in Montana along with her three labs and husband or spending time with the rest of her family in Chicago and Madison, Wisconsin as she continues her full time volunteer commitment to ONF. 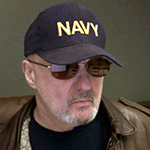 John served in the United States Navy from 1965 – 1969. His responsibilities included serving aboard U.S. Navy tankers (Oilers), participating in Underway Replenishment operations for the Fleet, and Interior Communications duties. He has been a member of the VFW and the Navy League. John’s reason for contributing his time and talents is because he witnessed the treatment of our Vietnam Vets upon their return. He lost 2 friends to PTS, and a friend who was killed in action in Vietnam.

John’s career started in New York City. He then accepted a position as an advertising designer for the Tampa Tribune in Florida. He then entered the trade show industry as the Design Director for the U.S. headquarters of ExpoSystems based in London, England. Later, as a Creative Director in the screen print industry, John was in charge of the illustration department that conceptualized and created graphic designs for NASA, Universal Studios, Sea World, Anheuser-Busch, and internationally for Hard Rock Café, among others. Upon relocating to Atlanta, GA he created and developed trade show exhibit design, graphic design, illustration and marketing programs for national accounts such as Triumph Motorcycles and Bank of America. In order to make use of his diverse talents John founded Fronza Design, LLC in 2001, with its main focus being on DeNovo bank branding and marketing as well as offering creative services to a variety of other industries. He currently provides Art Direction for a major corporation based in Atlanta, GA.

John has been the recipient of numerous awards including a National ADDY award for design.

John’s Uncle Frank served as a Tank Commander in World War 2 in the Pacific, and received the Purple Heart, and the Bronze Star. John’s brother also served in the United States Air Force.

John considers his degree of success in life to be directly related to his service in the United States Navy and the training he received. John wants to return the favor by volunteering with ONF. 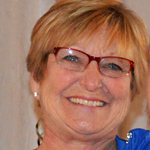 Nancy lives in St. Clair Shores, MI where she and her husband raised 2 children, Jessica and John, and where she continues to work full time as a Paraprofessional with students with Autism. She is the daughter, sister and mother of a veteran. In June of 2005 her role a caregiver expanded from family and students to her son John who suffered 3rd and 4th degree burns covering 80% of his body in OIF.

She and her husband stayed with him in BAMC for 9 months while he recovered. It was while at BAMC that she met the Mills who run ONF workshops. They formed a strong and special bond during those difficult times. Relying on each other for support and inspiration.

It was in November of 2015, 10 years later, that Nancy was asked to speak at an A-Head of Healing Workshop in Ann Arbor, Michigan on the role of being a Mother/caregiver/advocate/cheerleader of an injured soldier. Knowing first-hand the importance of the role of family, community and special organizations like ONF, Nancy shares her experiences and offers support, advice, and humor to others who face the challenges of caring for their veteran.

When Nancy has spare time she loves to spend it outdoors by the lake, quilting and enjoying her grandchildren. 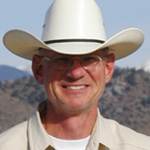 CAPT Edward. C. Zurey, Jr. USN (Ret.) is a 31-year veteran having served for most of his career on destroyers as a Surface Warfare Officer. During his Navy experience he served as ship’s company on five ships and was honored to have commanded USS Peterson (DD-969), two afloat squadrons, and the Navy ROTC Unit at the University of Michigan. He participated in Operations: Desert Storm while off of Syria, Southern Watch from the North Arabian Gulf, Enduring Freedom in the Indian Ocean, and Iraqi Freedom. He was also assigned to the Multi-National Forces-Iraq headquarters in Baghdad.

A life-long proponent of continuing education, Ed is the recipient of a Master of Science degree in Physics from the U.S. Naval Postgraduate School, Monterey, California; a Master of Science degree in National Security Strategy from the National War College in Washington, D.C.; a Master in Business Administration concentrating in Maritime Economics and Ports Management from Old Dominion University, Norfolk, Virginia, and a Master of Education degree in education technology from Montana State University – Billings. He is currently a Doctoral candidate in Education, Adult and Higher Education Administration, at Montana State University, Bozeman, Montana. 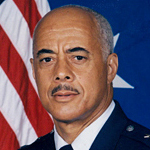 William A. Henderson
Board Chair Member

General William Henderson is the retired Commander of the Michigan Air National Guard Headquarters. He began his military career in the U.S. Marine Corps, where he served for 10 years as a fighter pilot flying the F-4 Phantom. He served with the 1st Marine Air Wing in Viet Nam flying 125 combat missions, and with the 1st Marine Division as a Forward Air Controller. Upon his return to the U.S. he became an F-4 Check Pilot, Instructor Pilot and Amphibious Warfare School graduate.

When the unit moved their aviation assets out of state, he joined the Michigan Air National Guard, where he flew the F-100 Saber and the A-7 Corsair for 13 years. He eventually moved to the state headquarters and was promoted to Major General, retiring in 1997 with 34 years of combined active duty and reserve military service.

General Henderson retired from General Motors in 2003 after 28 years of service and resides in Ypsilanti, Michigan. Currently, he serves as Board Member and Adviser for ONF. 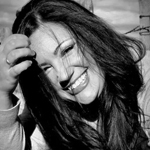 Katie got involved with ONF when her late fiancé invited her to an outdoor S.A.S. retreat in Montana, the summer of 2012. She was so inspired by the bonding and camaraderie that she witnessed there that she has been actively volunteering with ONF ever since.

Katie grew up in Detroit, Michigan, where she obtained her degree in Criminal Justice as well as a license to practice cosmetology. She is a former Police Officer, Wildlands Fire Fighter and Medical First Responder.

While Katie worked on a film set as a makeup artist, she met 1st Lieutenant Matthew Szymanski (US Army, Retired), a Veteran turned actor.  They became engaged and moved to Montana. Katie became a surviving family member to veteran suicide after Matthew took his own life.

Katie called ONF to dedicate herself to help families and friends deal with their loss and to help fight the high statistic of veteran suicide. This was the motivation behind ONF’s new focus on Suicide Prevention Awareness.

Shortly after Katie lost her fiancé, she lost her close sister to a traffic tragedy. Katie’s giving heart and positive outlook on life sets an example of resiliency for all surviving families and friends.

In the fall of 2014, Katie met John, a Purple Heart Recipient, amputee and burn survivor, while volunteering at an ONF A-head of healing workshop. The two of them found love in the most unexpected place and were married that following winter.

Today, Katie lives in Austin, Texas with her husband John, three amazing stepchildren and two German Shepherds. She is a caregiver to her husband and a full time volunteer for ONF. Together, Katie and John work with ONF awareness campaigns, PTS workshops, family survivor retreats and fundraisers. They are both excited to help give back! 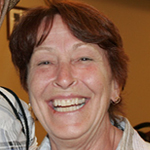 Peg is retired from the State of Wisconsin after 38+ years of service. Her job of administering the statewide certification program of water and wastewater operators required many skills, people skills, administrative skills, speaking skills and most importantly listening skills. It was the perfect preparation for what she likes doing best these days – helping veterans.

After Peg's son Shane was killed, Linda Kelly started ONF and Peg has been actively involved since it's inception. Peg has made many veteran friends through ONF and stays in contact with many on a regular basis. Veterans are a treasure to Peg and help her move forward in her life’s journey instead of focusing on her loss.

Peg is a very active volunteer with many organizations and causes, especially the veterans groups which are the most important to her. She became close friends with many Marines after Shane’s death and that opened her eyes and heart to helping Veterans from all services. It’s a bond stronger than blood and she had never experienced such a bond until she started working with Veterans. Peg is proud to be a part of the Veterans community and knows that her son, Shane, would be proud of the work she does with Veterans, too. 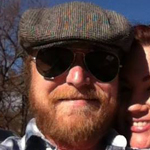 John is from St. Clair Shores, MI.  He joined the U.S. Army in 2004 as an 11B Infantryman. John served with the 2/69 Armored Infantry Regiment, 3rd Infantry Division at Ft. Benning in GA. His unit deployed to Iraq in 2005, and was injured in combat in June of that year. See John’s story on YouTube.

After John's discharge, he obtained his bachelors degree in social work from Texas A&M Commerce. John currently lives in Austin, Texas with his new lovely wife Katie, and has 3 wonderful children.

John is motivated to work with ONF to help our Nation's Veterans in anyway he can. 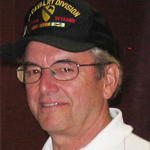 John got involved with Operation Never Forgotten in its beginning in 2007. He saw the great potential of ONF messages for our troops and their families. He has been extremely active in local Veterans volunteer work for over 25 years. His focus the past 11 years has been Post-9/11 Iraq and Afghanistan War troopers and Veterans.

Raised in Belleville, Michigan, he was drafted and proudly served as a battalion radio operator with the Army’s 2/7th Cavalry, 1st Cavalry Division from 1966-67.

John married Jane in 1984 and they had a son in 1988.  He received a B.S. and M.S. from Eastern Michigan University while he worked full time at Ford Motor Company.He retired in 1997 as an engineering supervisor.This allowed him to stay home to help raise their son and begin more extensive Veteran volunteer work.

He served as Vietnam Veterans of America Chapter 310 President for 4 years. Then he served as Commander of the Ann Arbor VFW Post 423 for 5 years. For over 15 years he has coordinated a large group of Veterans who perform around 140 military funerals each year.