Honor, Recognize and Thank Those Who Deserve It… 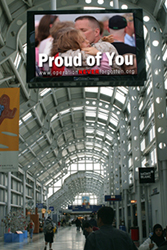 Operation Never Forgotten (ONF) creates public service announcements (PSAs) for Post 9/11 deployed troops, injured warriors, gold star families of fallen heroes and for suicide prevention.  These ONF’s campaigns can show-up on the forefront anywhere in the country, at anytime of year to include fulfilling special Gold Star Family requests or during national holidays. They help educate the public to better understand those who have given so greatly to protect us and our freedoms.

Troops returning from Iraq and Afghanistan have been welcomed home with appreciation messages on airport signs and highway billboards in their hometowns. ONF billboards came to life with motion and sound 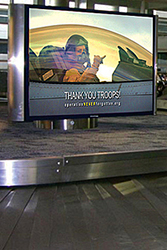 TV PSA THE POSSIBLE FOR WARRIORS

JOIN THE EFFORT!  GET INVOLVED! 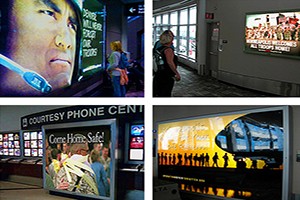 The ONF staff donates creative work, web design, campaign graphics, art direction, any production and media distribution. The billboard and airport spaces are donated by outdoor advertising companies as PSAs. Funding is needed for printing of traditional boards in cities where digital billboards are not available, and for the printing of back-lit airport dioramas. Money is also needed for video, filming, sound studio editing and other production for  TV, radio and documentaries. To help support more ONF awareness campaigns get involved! VOLUNTEER or DONATE!